In this casestudy you can read how Lisa Airplanes engineers deployed Femap with NX Nastran to build the first all-terrain aircraft in the world.

In 2004 a team of enthusiasts took it upon themselves to revolutionize recreational aviation and invent a new way to travel. They wanted an all-terrain aircraft that could take off and land as close as possible to its points of departure and arrival. By setting aside all preconceptions and literally starting with a blank piece of paper, they would devise a genuinely innovative plane: the Akoya.

The ambitions of Lisa’s founders gave the engineers some big challenges. First off the plane had to be fitted with ailerons that lifted the plane off the water, without compromising in-flight performance. From this concept came one of the most striking innovations: seafoils. This is a wing profile that created almost no drag during the flight phase. The Akoya would be the first seaplane in the world to take off from water using this technology. A ski-wheel combination was designed so it would be able to go from hard surface to snow(!) in all conditions. The icing on the cake was an ingenious system of folding wings, allowing the plane to be stored in a reduced space.

The Akoya had to be certified as a Light Sport Aircraft by the European Aviation Safety Agency via a detailed and complex procedure.  This requires a lot of documentation of physical trails and mathematical calculations to produce the proof sought by the certification authorities. The ski-in assembly located in the landing gear illustrates the process used by the engineers in Femap. The 3D CAD model was imported directly into Femap, which has all the pre- and post-processing tools needed, and solver NX Nastran was used to perform the analysis. 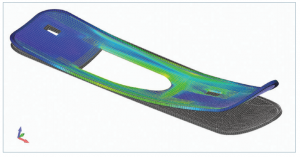 “The optimisation tools available in Femap allow us to adjust the thickness of the parts, make iterations, interactively display the results and find the best configuration. With Femap, we only add material where it’s needed. Our aggressive delivery schedule means we have to work quickly. The Femap solution is easy to use, and was very rapidly adopted by our users, even those who are non-specialists.” Lisa Airplanes.

Today the customers of Lisa Airplanes come from all around the world, and the market keeps expanding. They are now looking to develop a sustainable mobility approach. By building on the experience acquired with Femap and all of the data from the certification phase they plan to develop a range of electric aircraft.

We hope you liked this case study. Want to hear more about our services? Contact us! Make sure you don’t miss any of our other posts by following us on Twitter, Facebook or LinkedIn.